Pyramids and Pharaohs All to Yourself 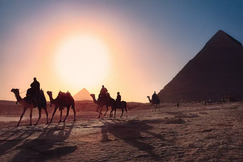 In recent years, after the fallout from the 2011 revolution, Egypt has re-emerged as a popular destination. Open throughout most of the pandemic, it’s been one of the go-to international spots for travelers, who have had all those antiquities largely to themselves. Few sights are as imposing and awe-inspiring as the pyramids and Sphinx towering above you against the desert backdrop. But the hits don’t stop there. At Sakkara, you can view an even older pyramid, the Step Pyramid of Djoser, and at Memphis, the ruins of the Old Kingdom capital.

Even to the people we call the ancients, Egypt was ancient. The pyramids at Giza had lorded over the Western Desert for two thousand years before the Roman Republic was founded, let alone the empire. The mysteries of the Land of the Pharaohs have intrigued travelers as illustrious as Alexander the Great, who founded Alexandria and conveniently discovered he was the son of a god and rightful ruler of Egypt on a visit to the oasis at Siwa. The fertile Land of the Nile and its queen Cleopatra VII captivated prominent Romans Julius Caesar and Marc Antony and became the breadbasket of the empire.

Egypt has played a key role in the major monotheistic religions, with Jews celebrating their Exodus from slavery there to their home in the Promised Land, and holding prominent positions in municipal life in Alexandria from its founding. In Christian tradition, the Gospel of Matthew details the Holy Family’s flight into Egypt to save baby Jesus’ life, and Coptic Christians living in Egypt still number around 10 million. Islam came to Egypt less than 20 years after the religion’s founding through Arabian conquest and has been a major part of life there since, with nearly 90 percent of the population today practicing.

At Luxor, you’ll find more than 400,000 square feet of well-preserved temples on the banks of the Nile.

A cruise along the river will take you past the Valley of the Kings, the engineering marvel of the Aswan High Dam, the island Temple of Isis and Philae, and the Temple of Ramses II at Abu Simbel, which was rediscovered underneath the sands in the 19th century and taken apart and reassembled piece by piece to accommodate construction of the dam in the 1960s. Sailing Egypt’s lifeblood of a river was enough to seduce Caesar, the historian Appian tells us, and it will entrance you as well.

Before heading home, you can explore the modern metropolis of Cairo, one of the world’s largest cities, and Faiyum, a city with more than 4,000 years of habitation. They’re part of the mystical blend of old and new Egypt delivers.

From Sphinx to Pharaoh, Egypt entices every sense with its history, art, and culture, making it a country worth discovering, especially now with lesser crowds. I’ve listed some options for where to stay while in-country below, and you can contact me today so we can start planning your Egyptian Passage.

In the heart of Cairo on the banks of the River Nile, Four Seasons Hotel Cairo at Nile Plaza opens the door to discovering Egypt’s 5,000-year-old ancient mysteries, minutes away from the majestic pyramids, Egyptian museum, and 1,000-year-old market. The heartbeat of the Nile, Four Seasons provides a sense of discovery and excitement with views of vibrant Cairo, nine stellar dining experiences, and the most authentic spa in the city. Opulent, bright rooms offer the perfect blend of comfort, space, and style with triple-glazed windows to ensure quiet, deep soaking tubs, Wi-Fi, and views of the Nile or the 12th-century citadel.

In the heart of Cairo, Four Seasons Hotel Cairo at The First Residence encompasses enchanting views of the Nile River, Great Pyramids, and botanical gardens. The hotel boasts 262 rooms, including 50 suites, which are among the city’s most spacious and lavish. Spend the day lounging by the pool, indulging in an aromatic massage at The Spa, shopping three floors of high-end boutiques at The First Mall, or entertaining yourself at the world-class casino. Steps away from the hotel is the First Nile Boat, a culinary and lifestyle location featuring a Brazilian grill, pan-Asian cuisine, a Greek taverna, and a fashionable nightspot.

From your private terrace at Sofitel Legend Old Cataract Aswan, watch feluccas as they sail past Elephantine Island. Most of the 138 rooms and suites offer Nile views; choose from the original Byzantine-style historic palace or the lavishly contemporary Nile Wing. Regally perched atop a pink-granite shelf, this Victorian-era hotel has been extensively renovated with French and Middle Eastern decor while still maintaining its period grandeur. Choose from six restaurants and bars, including the signature 1902 restaurant, serving nouvelle cuisine under a 65-foot dome. The So SPA is a wellness temple in the heart of Nubia.

Discover 5,000 years of Egyptian culture on a seven-day cruise between Luxor and Aswan aboard The Oberoi Zahra. With just 27 cabins and suites, The Oberoi Zahra offers some of the most spacious, private accommodations on the river Nile. All have high-speed Wi-Fi and river views. The restaurant has a daily, changing à la carte menu, while the spa offers a wide range of treatments. The cruiser also has an open-air, temperature-controlled pool. While aboard the cruiser, guests can experience traditional dance and music performances.